'Pandemic Pivots' in Travel We Hope Will Stick Around Forever

Necessity is the mother of Invention, they say, and the pandemic, while it has shut down travel, has also inspired some innovations we love – and are hoping will stay with us long after travel is back to full swing.

The Cabins at Mountain Village

The Town of Mountain Village in southwestern Colorado, is just outside the legendary ski resort of Telluride.
So what better ‘pandemic pivot’ to allow visitors to safely enjoy the town’s restaurants – and reinforce the feeling of being on an alpine vacation - than a collection of gondolas retired from a ski lift and up-converted into private dining cars? 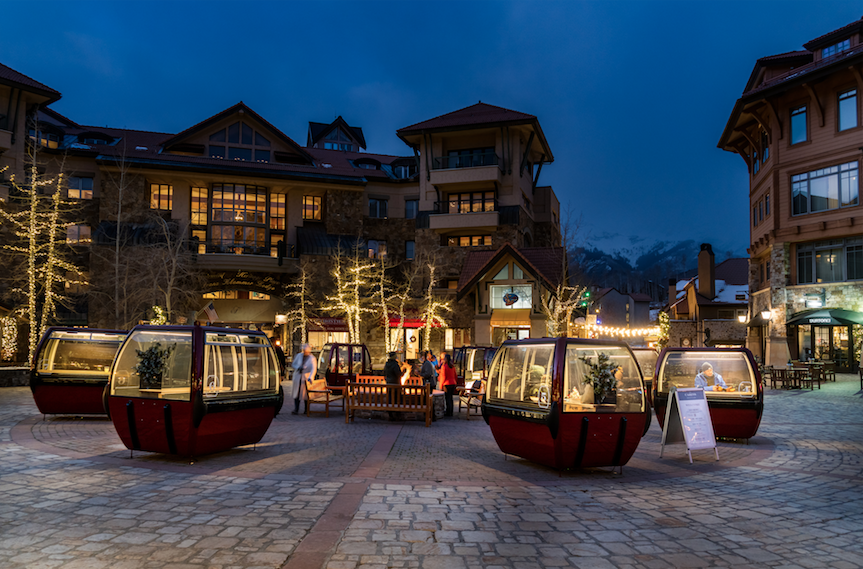 (Photo by Ryan Bonneau provided by Town of Mountain Village)
At the beginning of the ski season, the town ordered 20 re-purposed cars and set them up in clusters in plazas around town in the vicinity of over a dozen restaurants. Each gondola accommodates a bubbled group of 4-6 people in ski gear comfortably, 8 in a cozier squeeze.
The Cabins aren’t tied to any individual restaurant. Gondolas are available on a first-come, first-served basis. The town has QR codes to its ‘Dine Outside’ web page inside each car, so diners can settle themselves at their private table, then access neighboring restaurants’ take-out menus to order their meal.
One town official told me both visitors and residents love The Cabins. “They are very popular, it’s difficult to find an open cabin during prime dining hours. Several friends of mine with children have reported their kids are the biggest fans of The Cabins and they have to coax them out when it’s time to go home.” 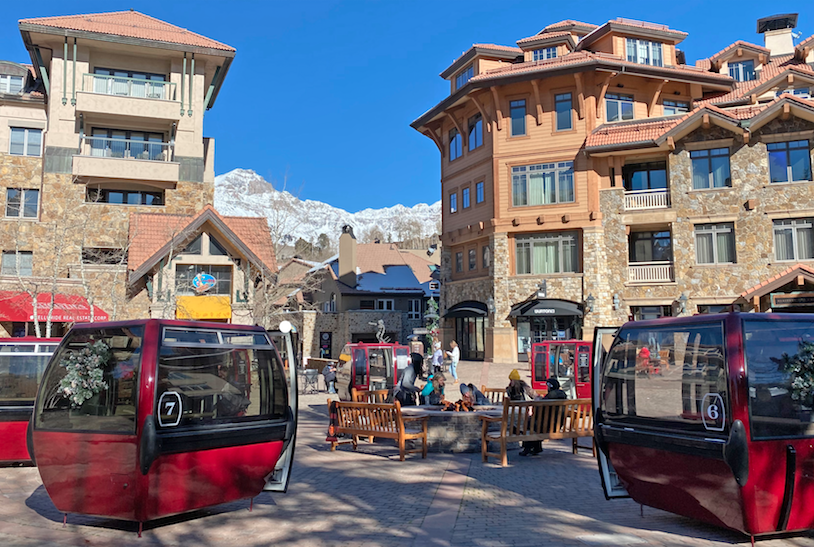 (Photo courtesy of Town of Mountain Village)
So popular are the private dining gondolas, the town has installed 5 more. And while the original intent was to provide a creative solution to allow local restaurants to serve diners during the pandemic winter, The Cabins have become such a signature of the town’s alpine lifestyle, they’re set to become a year-round feature of a visit to the Town of Mountain Village.

There’s a new concept in private dining in the Canadian Rockies, too.
For over 130 years, the world-famous Fairmont Banff Springs hotel has been the legendary landmark of the historic, alpine resort town of Banff, Alberta in the heart of UNESCO World Heritage site Banff National Park. 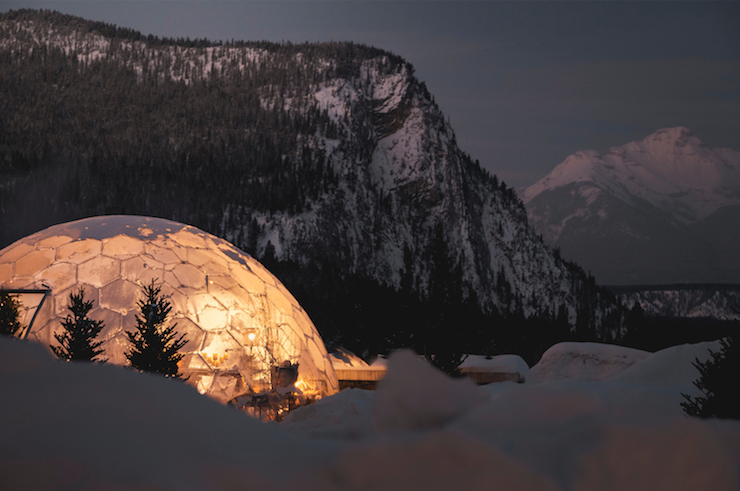 Canada’s “Castle in the Rockies” now has a new, outdoor, private dining venue. The 360° Dome evokes iconic imagery of Canadian winters and shelters up to six guests from the elements as they enjoy panoramic views of the Canadian Rockies and the ‘Castle’ from its terrace.
Inside, the 360° Dome is designed for two to six bubbled guests with rustic luxe elements of winter chic for a couple to indulge in a romantic, gourmet dinner, a group of friends visiting over wine and charcuterie in the afternoon, or a family enjoying an extravagant brunch. 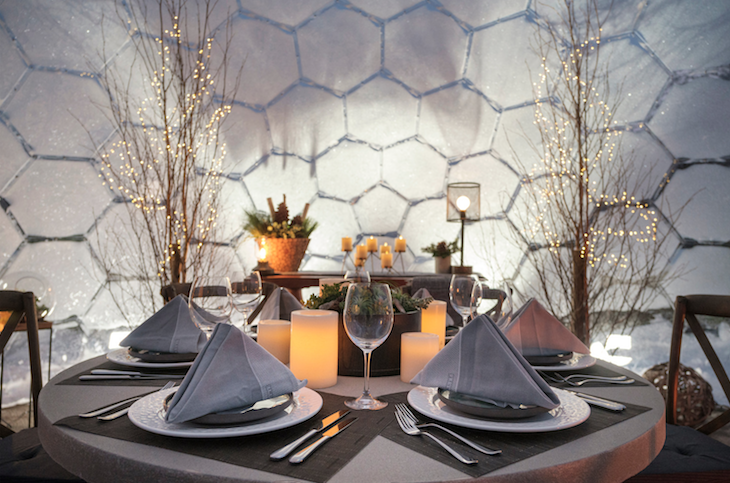 (Two above photos courtesy of Fairmont Banff Springs Hotel)
The hotel teased the fine dining menus designed by the Fairmont Banff Springs’ Executive Chef. Family-style brunch includes make-your-own mimosas, eggs benedict and buttermilk pancakes, wine and charcuterie platters feature housemade preserves and cured meats paired with locally-sourced cheese and Canadian wine, and the indulgent five-course dinner features locally-inspired flavours and ingredients, including the Brant Lake Wagyu Beef Carpaccio and the Long Bone Bison Short Rib.
The 360° Dome at Canada’s ‘Castle in the Rockies’ may be a fixture of the winter season, with open outdoor dining taking over when spring weather permits. But its warmth and character in the winter months transform the necessity of bubble dining into a story full of charm.

Another Fairmont Hotel, the Royal York in Toronto, has debuted ‘Clockwork at Home’.
If the Fairmont Banff Springs hotel is Canada’s ‘Castle in the Rockies’, its big city counterpart is a castle in the heart of the country’s biggest metropolis. The epic hotel shares the French chateau design characteristic of the Fairmont hotels across Canada that were born as a chain of luxury rail hotels. Opposite Toronto’s Union Station, the Royal York was once the tallest building in the British Empire, and remains the elegant grand dame of hospitality in the region. 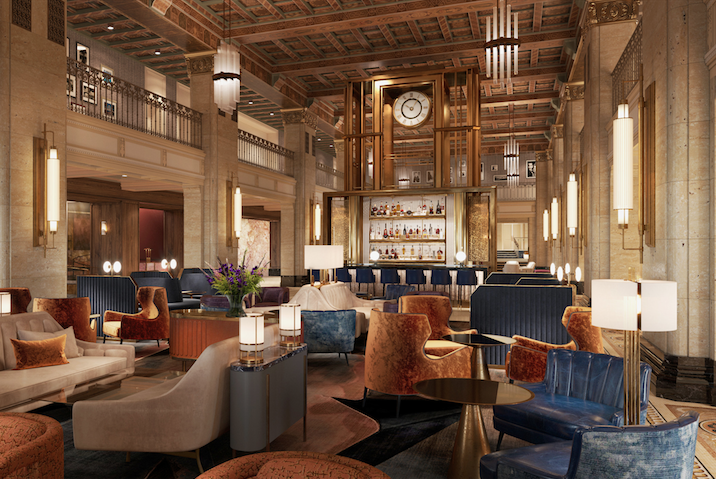 A spectacular re-imagining for its 90th anniversary just before the pandemic introduced a glamorously updated lobby bar. Clockwork is centered around a new statement timepiece, replacing the spiral staircase clock in the lobby that has been a recognized meeting place in the city for years.
Inspired by its legacy as a railway hotel, the Royal York’s Clockwork marries modern elegance with vintage luxury train carriage style, right down to Pullman car style banquettes. Clockwork is a swanky and stylish bar for champagne and oysters, or a perfectly crafted cocktail over sparkling conversation. 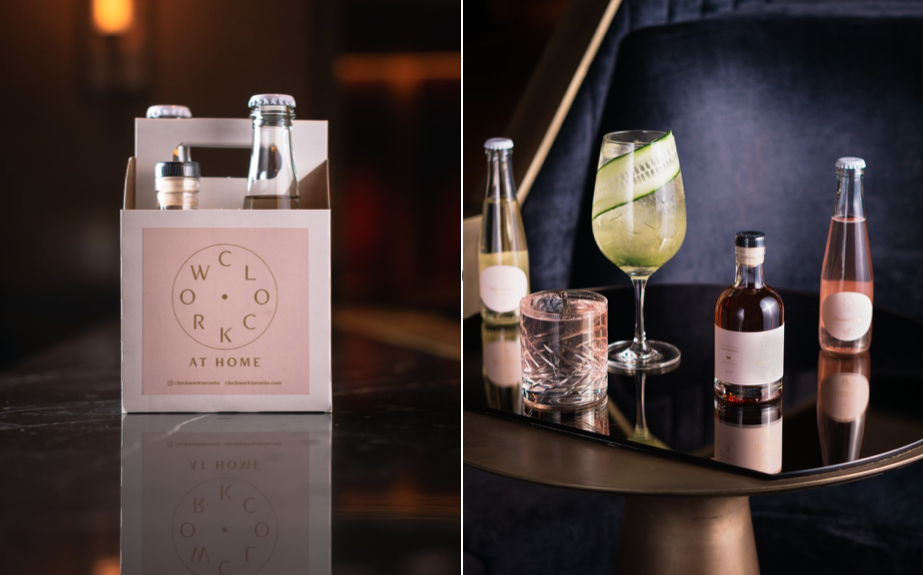 (Above three photos courtesy Fairmont Royal York)
With the hotel closed, Clockwork’s mixologist has bottled up his creative juices into craft cocktails Torontonians can order online, pick up in the afternoon, and recreate the swanky atmosphere of the Royal York during a stylish evening at home.